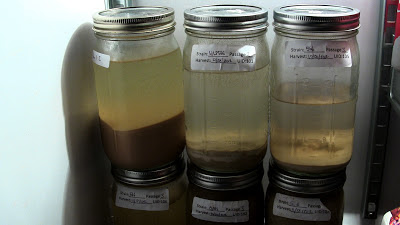 Some subjects have a plethora of information available allowing the home brewer to evaluate different pieces of data and come to their own conclusion.  However, other subjects have one piece information that misinformation is inferred from.  The effects of refrigeration on viability is one of the latter.   Mr. Malty's slurry viability slider is often misrepresented in this manner.  For a new slurry this slider shows the viability as 94% and for every day it drops 1.6%, and bottoms out at 10% after 53 days.  While Jamil likely had good intentions when designing this into the calculator, it is commonly misused.  Perhaps it was an attempt to show that a slurry cannot be kept in the refrigerator indefinitely.  There are a number of other consideration when deciding to repitch a slurry such as contamination and overall health of the yeast.

There are much more important considerations when it comes to the viability of a starter than the amount of time it has been refrigerated.  Fruit(3) has a drastic impact on viability as does alcohol.(4)

The linear decay has actually been propagated over to Yeast Calc, another trusted source.  Rather than simply propagate information, I did the tests for myself.  Over the course of a month data was collected on seven different slurries from two different strains used to make a variety of beers.


Conclusion:
While the initial viability can vary greatly, the viability over time dose not change a measurable amount over the course of one month.

(1) The Practical Brewer,Yeast Strains and handling techniques, Sources and Maintenance of Pure Yeast Cultures. p276
(2) Kirsop (1991)
The italic text above is a paraphrase of the texts referenced as (1) and (2)