How Accurate Is A Cell Count? 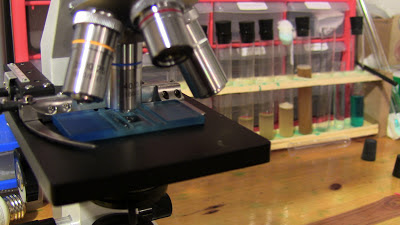 Cell counts aren't perfect, but it will get you closer than any other method I know for estimating the number of cells in a slurry... and I've heard a lot of different methods.

To perform a cell count a sample of the slurry is placed on a specialized microscope called a hemocytometer.   This slide is divided into 25 "boxes" that are of a specific volume.  Typically five boxes are counted and from that the average viability and cell densities can be calculated.  The standard deviation, or accuracy, can also be calculated.  A typical standard deviation for viability is 1%-10%  If I see more than that I recount the slide.

Cell counts use an extremely small sample.  Less than on tenth of a milliliter is placed on the slide.  The actual volume of cells that are counted is typically 20 nano liters.  That's 0.00002 milliliters.  On top of that the sample typically needs to be diluted twenty to forty times from the slurry density.    Another way to think about it is the number of actual cells that are counted.  In a typical liter of slurry there may be one trillion cells, of those, only about 500 are actually observed.

Don't let that scare you.  Even with all of those factors working against you the accuracy is still very high.  The good thing is that as long as the slurry is well homogenized with adequate stirring or shaking even this small sample is representative of the entire slurry.

Because viability is a ratio of cells, it is not important the volume of cells is correct, or that the exact dilution is known.  For the cell density, however, volume and dilution are important.  Error in cell density can be seen from day to day measurements of the same slurry.  When I first started doing cell counts I saw a variation of about 25% in cell density.  This is much better than the factor of 10 that is common from one slurry to the next, but a substantial number when trying to work with absolutes.  It is for this reason that consistency is vitally important.  Flocculation can also make determining cell density difficult.  When the cells are clumped up together it is hard to see exactly how may cells are present.  Currently I am using both an Acidic Acid MB solution and a Glycine MB solution to separate the cells for counting.  Counts are much more consistent using these methods I have recently employed.
There are other variables in cell count accuracy.  I intend to explore those in detail in later posts.  These include:
In conclusion, the small error in viability is much better than the factor of ten variation I have seen in fresh slurries, and the 25% variation in cell density is much better than the factor of 10 that can be attributed to protein concentration.