How Long Does It Take to Carbonate Beer? 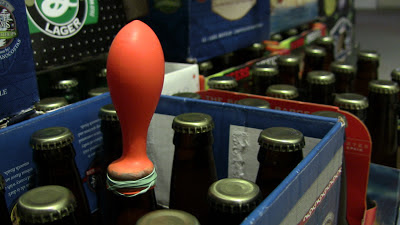 The complete answer is: "It depends"  but most beers will be fully carbonated after three weeks at 70°F followed by 1 week in a refrigerator.

... but you might not have to wait that long.

One solution to beat the wait is to open a bottle of beer every few days until they are at the carbonation level of your liking.  However this results in tasting many disappointingly flat beers.  If there was only a way to measure the level of CO2 in the bottle without opening more than one.  As your luck would have it, there is such a method!

If a balloon is placed on top of one of the bottles and secured it will collect the gasses that are produced during this carbonation period.  It's simple.  When the balloon begins to deflate, the beer is carbonated.
Balloons are not great at holding pressure over a time period of two weeks.   Consider how long party balloons stay floating.  If you don't get them the day of, or day before the party you're going to have lack luster balloons.  In the same way that helium leaves the party balloons over time, the CO2 will leave the carbonation indicator you have set up.

This works for indicating when the yeast have completed metabolizing the priming sugar, but doesn't give you any indication of how much CO2 was produced.

To measure the CO2 production you will need to vent the generated CO2 into a graduated vessel for measurement.