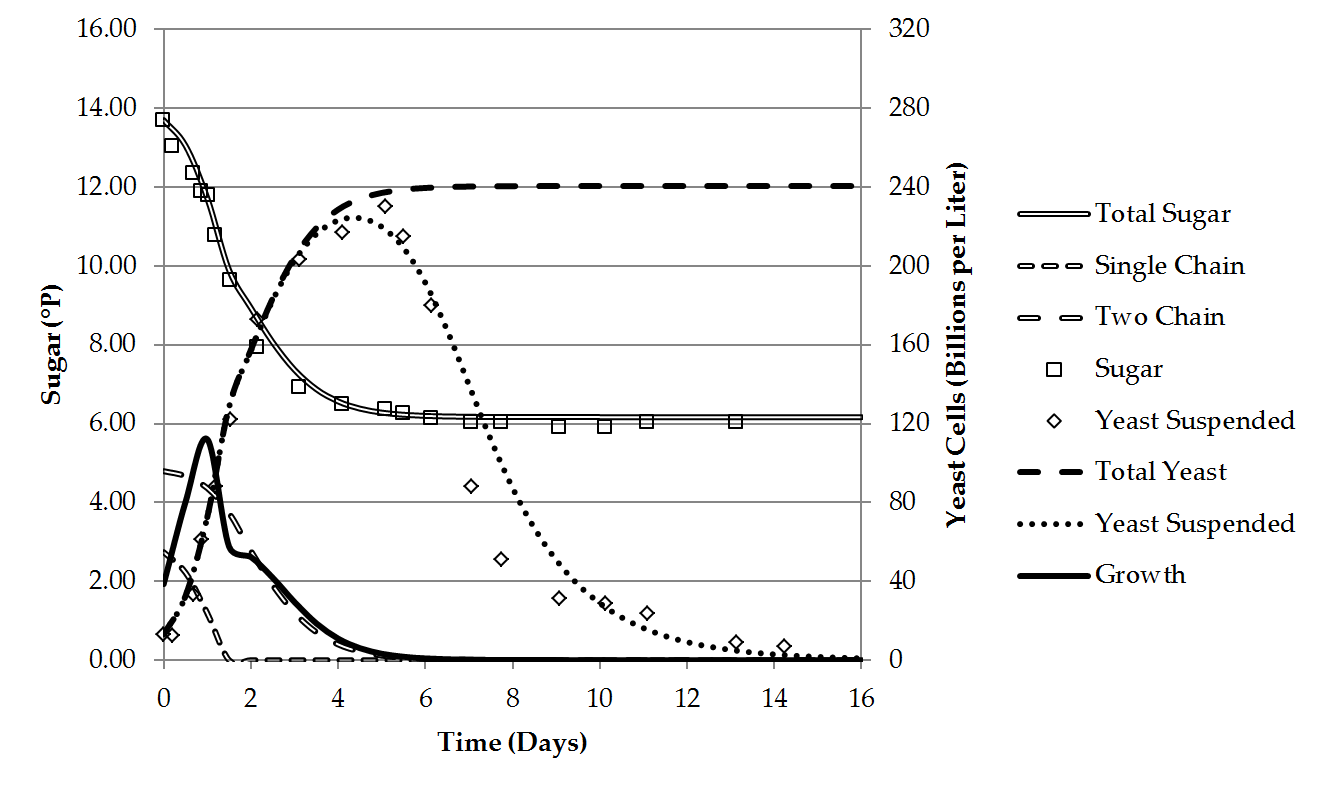 For my book I developed an excel based model for yeast growth.  This was based on experimental data, physical and biological properties, and also a few "scale factors" to align the model with measured data.  Most of the data is from beers with an OG from 9°P to 16°P (1.036 to 1.064) at temperatures near 70°F (25°C) using standard pitch rates of US-05 yeast and Briess Malt extract.  The model should hold up fairly well near those operational points, but I am sure there will be some deviation in nearly every case and significant deviation in a few cases.

Description of Graph
The lines are generated by the model.  The squares and diamonds were measured experimentally.  The cells that have an orange background are intended to be changed.

Total Sugar - Sugar concentration in degrees Plato (multiply by 4 to get brewers points)
Single Chain - Component of Total sugar that is simple sugar
Two Chain - Component of Total sugar that is more difficult to ferment 2 chain sugar.
Sugar - Measured sugar (Refractometer corrected for alcohol)
Yeast Suspended - Billions of cells per liter (as counted on a hemocytometer)
Total Yeast - Calculated total yeast population
Yeast Suspended - Calculated yeast remaining in suspension (note that this is highly strain dependent, but can be adjusted in the model)
Growth - Billions of cells grown per day.

My book goes into more detail about the application of this model and how this graph can be used to better understand yeast growth.

Thankfully, my wife understands my passion for good beer, so as any beer lover would do we made sure to work some great beers into our vacation.  We tried some stellar beers, but not every place was a beer haven. 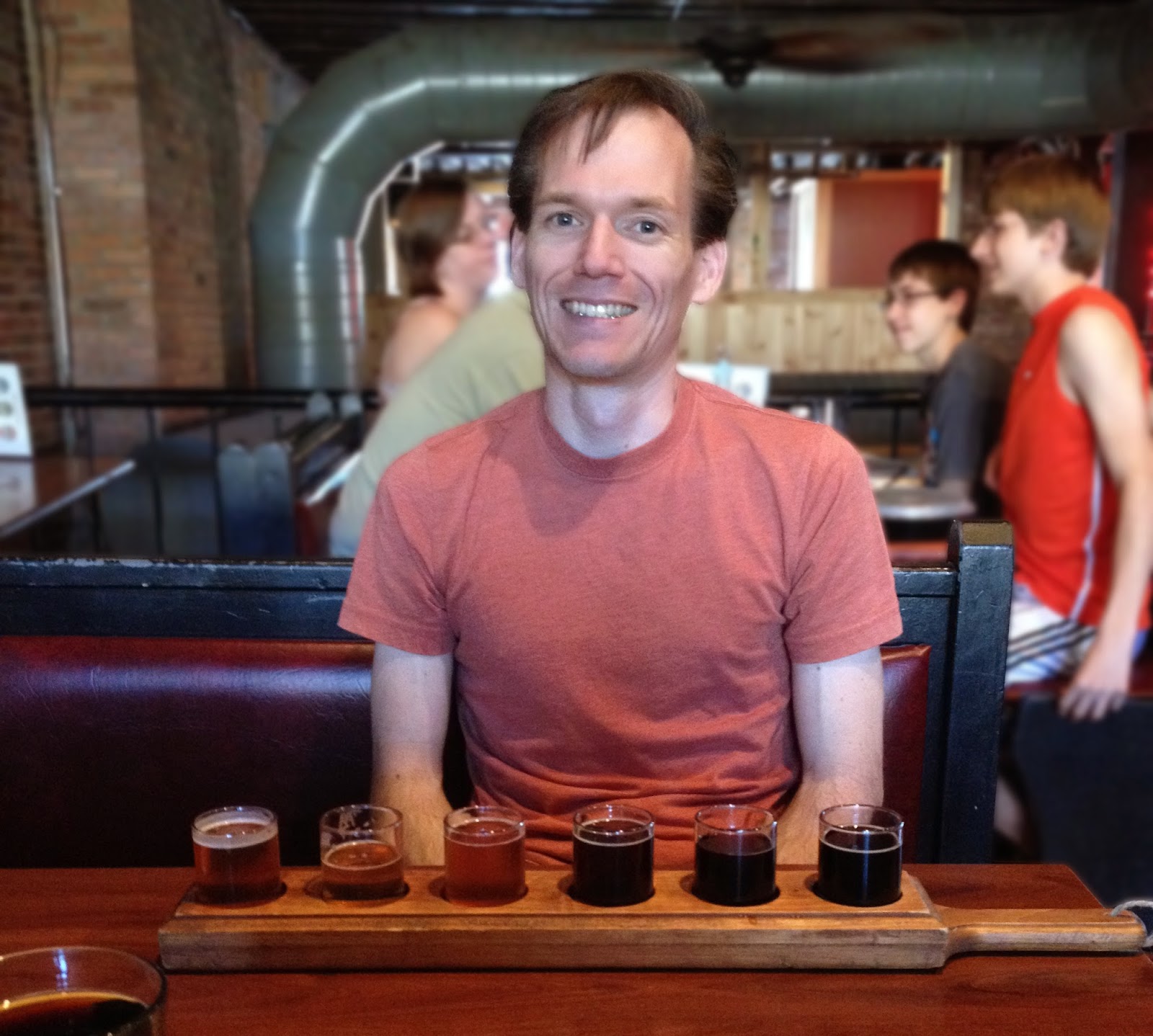 The first beer stop was Brown's Brewing Company, located in Troy, New York.  (http://brownsbrewing.com) All of the beers here were excellent, as my smile in the photo above may indicate.  A flight of 6 beers was roughly the same price as a pint and you get to pick the beers, making this a great option.  The beers, along with my comments, from left to right are:
1) Pale Ale - Almost as hoppy as a typical IPA
2) Cream Ale - By far the best cream ale I have ever had
3) Belgium Wit - leaning more toward a fruity American Ale, but one of the best American Belgium style beers I have tried.
4) Brown Ale - Perfectly true to the style.  Leans a little more to the northern brown, with a prominent caramel flavor.
5) Black Lager - About as good as I could imagine a black lager could be:  A nice lager with black malt for color.  In my opinion, this is style is likely to be a passing fad.
6) Oatmeal Stout - An excellent example of the style.  This balances the black malt well with all of the other components of a stout. 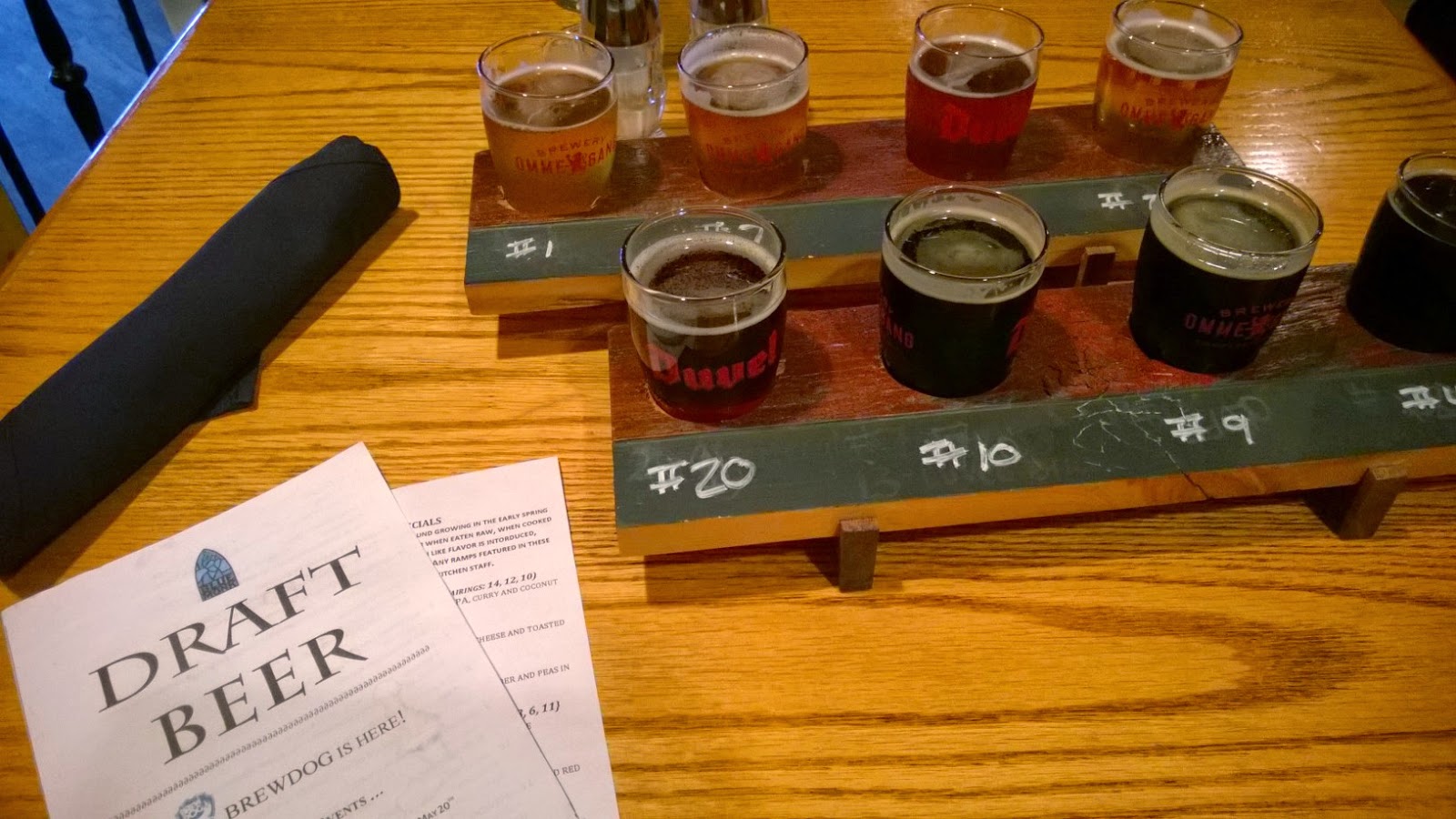 In Buffalo we visited Blue Monk. (http://bmbflo.com)  The beer selection here is outstanding with over 30 beers on tap and over 100 in bottles.  There are four different flights to choose from: Hop head, America, Belgian, and Dark.  We went with the Belgian and the Dark.  All of the beers were excellent, and each one flowed nicely to the next. 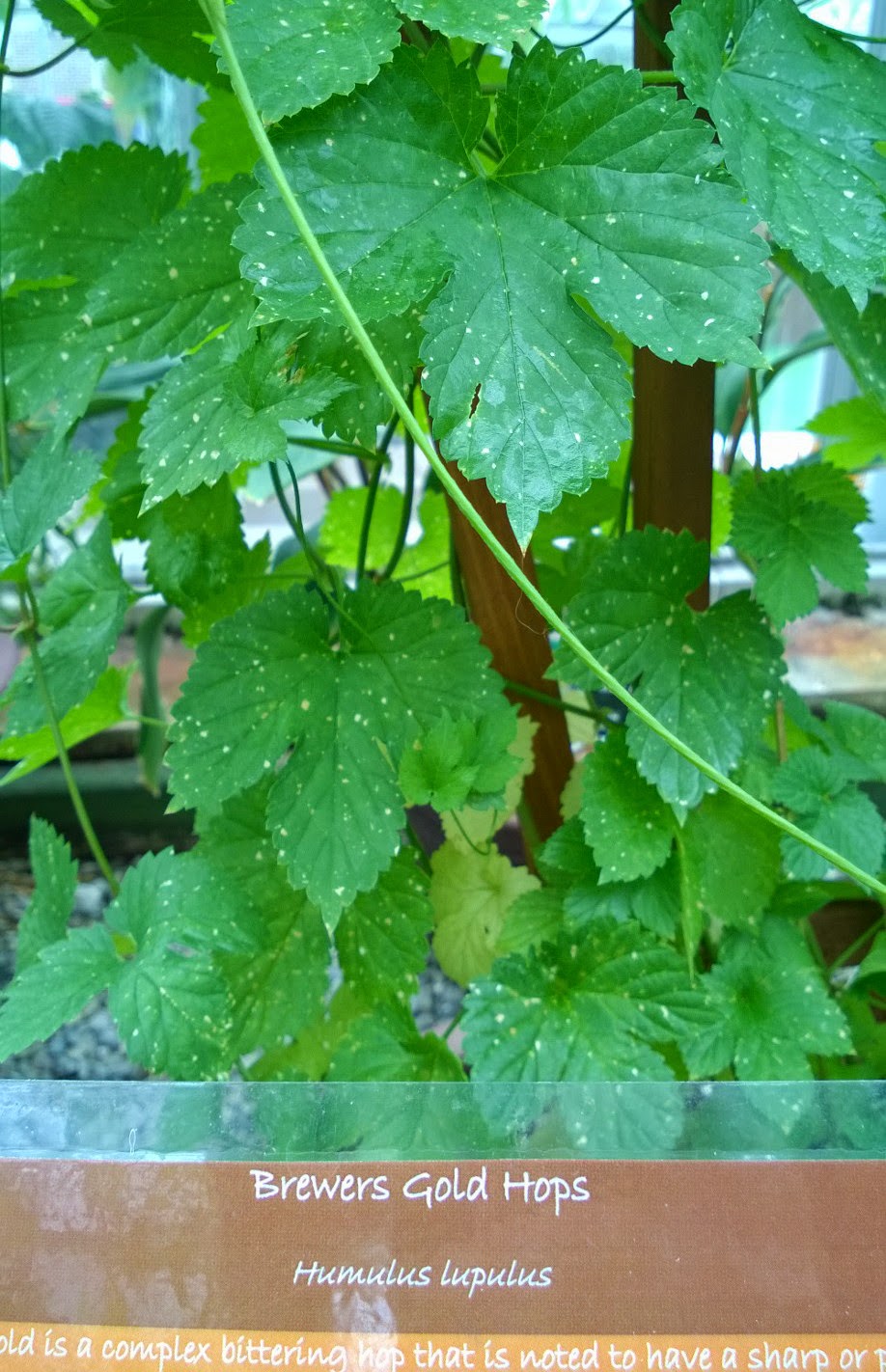 We even found references to beer in some unsuspecting places. The Buffalo Botanical Gardens were growing Brewers Gold Hops! 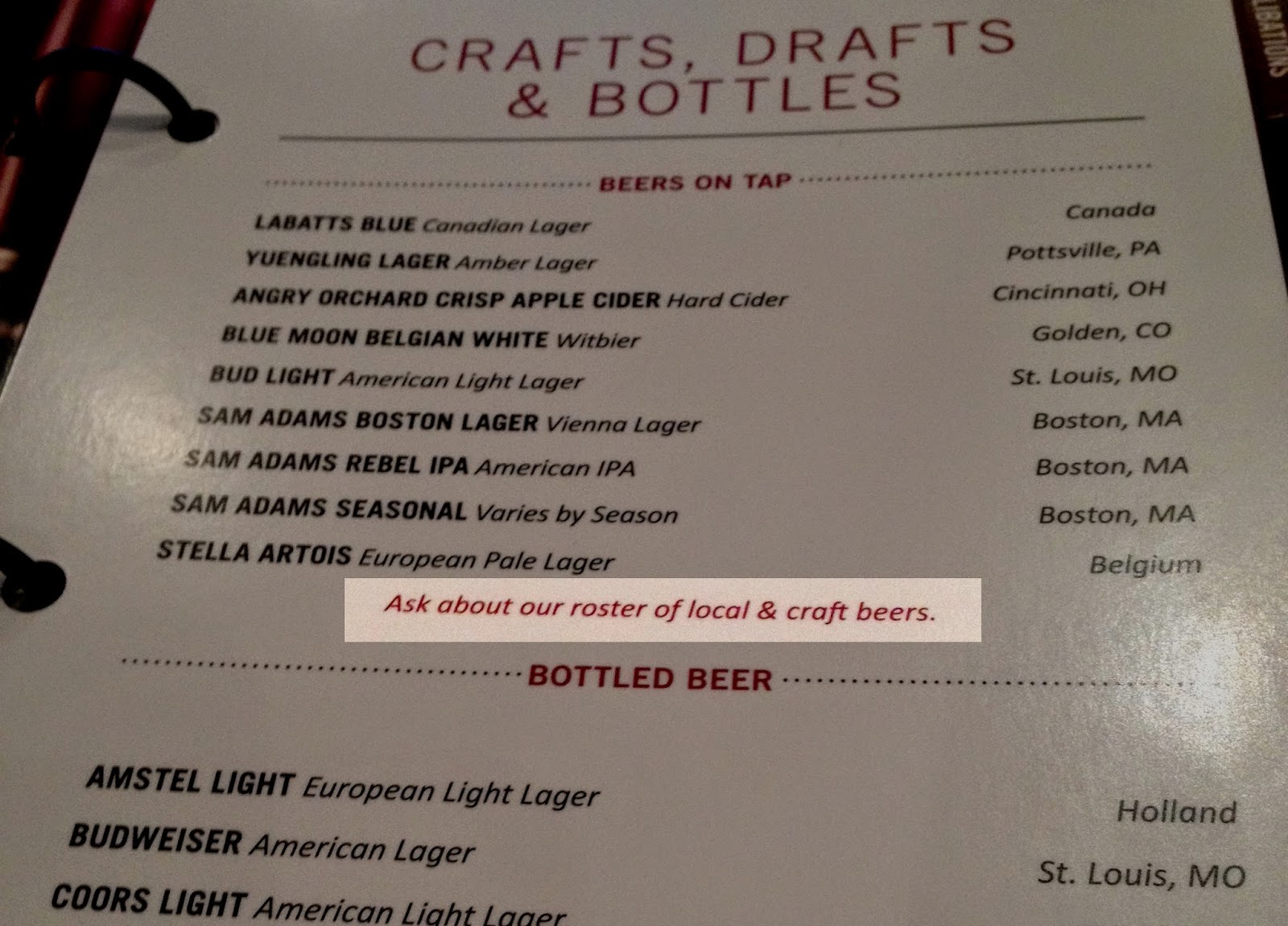 There are some places that you can't expect to find great beer despite what the menu says.  When I inquired at the bar, the bartender responded: