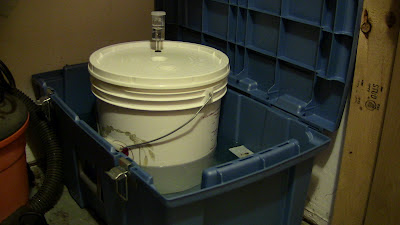 At about 68% wheat, efficiency was an issue with this batch.  Although the brew bag I have works wonderfully on barley malt, the protein partials of the wheat seemed to block quite a bit of the water during the run off.  Even with a single sparge the efficiency was only 57%.  However, a low efficiency was expected, so hitting the OG was not a problem.  Next time I brew with a large amount of wheat I'm going to try a new bag made out of material with a slightly larger weave.
Posted by Unknown at 1:54 PM No comments: 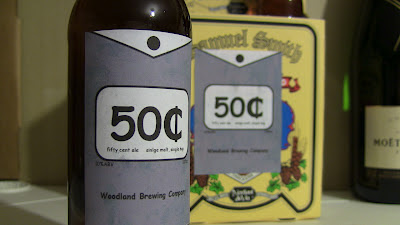 Mashed and boiled a SMASH (Single Malt And Single Hop) Brew of 2-row and Challenger Hops.  These are both things that I use is just about every beer, so a SMASH of these two was in order.  The only other recipe target was to make the cost per bottle 50c.  This one came in at 10% ABV and 15 IBUs.

In addition to the 50c variety by watering down the beer at the time of bottling a 28c variety at  6%ABV and a 19c session beer at 3.4%ABV
Posted by Unknown at 1:32 PM No comments:

Email ThisBlogThis!Share to TwitterShare to FacebookShare to Pinterest
Labels: 50cAle

Using an ice or water bath as a swamp cooler is common practice by the home brewer to allow fermentation at temperatures lower than the ambient air temperature.  Swap coolers are effective very effective at lowering fermentation temperature and also maintaining temperature without a dedicated fridge.  Water conducts energy much better than air.  The thermal conductivity of air is 0.025 Watts per Meter degree Kelvin, while water is 0.5 meaning that water conduct heat twenty times better than air.  During fermentation the yeast create heat energy.  When the fermentor is surrounded by air this heat will raise the temperature of fermentation by 4 to 10 degrees Fahrenheit above that of the air. When the fermentation chamber is in a water bath, the water acts like a heat sink for the fermenting beer.  This essentially expands the radiated area from that of the glass and air surrounding the beer to that of the area of the bin used for the swamp cooler.   It also creates a much larger thermal mass for the yeast to heat.  This large water volume therefore helps stabilize the temperature of the fermentation.  This makes the temperature of the fermentor more stable, and also can radiate the thermal energy produced by the yeast into the air via the large volume of water.

Bottom line: Swamp coolers provide much more stable temperature, even if you aren't looking to lower the fermentation temperature.

When using ice to lower the fermentation temperature the temperature will drop very quickly as the ice melts in the water bath.  If this drop in temperature is more than a few degrees yeast will start to prepare for dormancy.  Once the temperature rises they will start fermenting again, but this is at a cost of energy.  Unwanted byproducts are produced as the cells shift back and forth between these phases.(1)  For this reason it's best not to use more than one gallon of ice in 5 gallons of water.


The temperature of the water in the swamp cooler goes through two distinct phases.  Cooling, when the ice is added, and warming, after all the ice has melted.  The cooling phase can be modeled fairly simply.  There are two important considerations during this phase: time and temperature.  The time it takes for the ice to melt is proportional to the size of the block of ice.  Ice cubes will melt in a mater of minutes.  A 20oz bottle of water will take about 45 minutes, and a 1 gallon container of ice can take up to 2 hours.  The resulting low temperature can be approximated by considering thermal mass.  This is simply the conservation of energy, and can be expressed with an equilibrium equation.
(mass of water * temperature of water) + (mass of ice * temperature of ice) = resulting temperature of water * (mass of water + mass of ice)
The plastic tot bin that I use to cool my primary fermentor has six gallons of water in it.  If the starting water temperature is 70 degrees and one gallon of ice is added the resulting low temperature will be 64.6 degrees.  experimentally it seems that this takes about 2 hours, however the low temperature is never truly achieved because some energy is lost to the air and to the container.The warm up phase is highly dependent on the type of container that is being used to hold the water.  A cooler will hold temperature much better than a plastic bin, but either will work just as well if the thermal coefficient can be calculated. The rate at which the water warms up is proportional to the difference between the water temperature and the air temperature.  This can be modeled with an exponential equation:

The temperature coefficient can be found by knowing two points on the time line of the warming water.  After the ice has melted this can be measured with two temperatures and the time between them.  For example:

Putting it together is a little more difficult.  One challenge is that the heating of the water occurs during the melting phase of the ice.  So the low temperature calculated as the equilibrium point assuming conservation of energy is never achieved.  This is because some of the energy is lost to the air as the water temperature drops below the air temperature.  Either relatively complex integrals will be needed to calculate this, or experimentation can be done to make up for this difference.
The big question that still needs to be answered is: "How much ice should I add to achieve a specific temperature?"  The calculations, experimentation, and measurements outlined here will provide that answer, but here are some general guidelines: 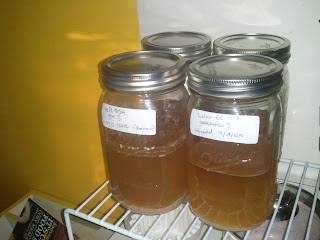 My four pet yeasts... Well, that's what Terri calls them.  Over a month ago I poured the slurys off a couple of batches when bottling.  They went into the fridge, and in the fridge they stayed, until a few days ago.  Over time refrigerated yeast will loose it's viability, and give way to other bacteria that may have been introduced into the system.  After about a month brewers yeast is only about half viable.  (1) These two different yeasts had been sleeping in the refrigerator for about a month, so it was time to wake them up.  There wasn't a new brew to pitch them into, so I made some small starters to create some new cells.  It cost about a dollar to make two pint starters, so with the cost of a vial of yeast of over seven dollars this can be done six or seven times and still be saving money.  Six generations is also about as long as recommended to use them.

We've enjoyed using these yeasts in our brewing.  The Lalvin made a wonderful dry cider with a champagne taste.
Posted by Unknown at 6:01 PM No comments: 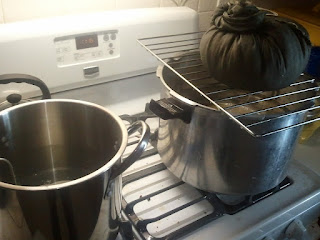 The bag was easy to make out of voile fabric.

And if you don't know someone with a sewing machine, 5 gallon paint strainer bags work great.

In this picture the bag has been twisted up to squeeze out the wort and set on a cooling rack to drip into a four gallon pot that serves as both the mash tun and the boiling kettle.  The pot on the left was used for sparging.  When the run off was nearly complete, after twisting the bag and squeezing it with a pot lid, The volume was measured and sparge water was added to make up the difference that will be needed for the boil volume.  The brew bag was dipped into the pot, opened, and stirred to wash the remaining sugar off of all the grain.

The end result?  74% efficiency.  Not bad for the first time out of the gate!

The biggest downside I see to this method is the volume that can be brewed.  With a 4 gallon pot the most you can put in it is about 10lbs of grain in 10qts of water.  So a five gallon stout recipe is simply not going to fit.  You'll have to scale back your Guinness clone to 3 gallons or so.  At 75% efficiency (which is normal for BIAB) and using 37 GP grain, that puts you at 277.5 Gravity points per gallon.  So a three gallon batch the OG is 1.092, which is pretty good, but a five gallon batch is 1.056 which would yield a beer that is average in alcohol content. So for big beers, unless you don't mind a small batch, you're going to need to build yourself a cooler-tun.
Posted by Unknown at 1:33 PM No comments: 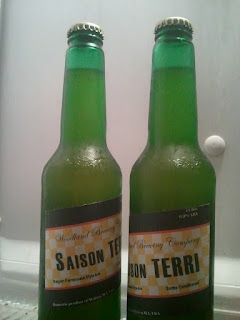 The first of the Saison Terri just went into the fridge!  As of today it has been bottle conditioning for two weeks.  Because of the high end of summer temperatures and the low flocculation of the yeast my hope is that this will have enough CO2 produced at this point to carbonate the beer.  It will sit in the fridge for one week to allow more of the carbon dioxide to go into solution.

UPDATE:
This one came out very good!  We will be doing this recipe again! The high fermentation temperatures coupled with the WLP566 Saison yeast created some wonderful flavors.

Posted by Unknown at 1:16 PM No comments: