How to make a beer recipe clone 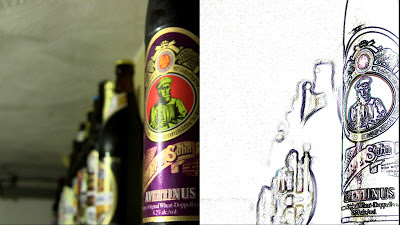 When cloning a beer there are numerous places that you can gather information.

1) The brewers website
2) your own measurements and experience.
3) The BJCP style guide
4) Sites that rate beers
5) forums and other online recipes.

The brewers website
If you start with the facts then the assumptions and estimations that come up later in the processes will not be as influential in your recipe.  Most brewers are very proud of the product that they make and will tell you quite a bit about what makes their beer different which almost always dives into some of the processes and ingredients used.  The Hoegaarden web site has several important clues on the recipe.  Hoegaarden is described as a classic wit beer with all of the ingredients grown in Belgium.  Belgium pale malt is therefore the likely the main base malt.  The mash is 2 hours and 30 minutes and during this time the temperature is gradually brought to 75 degrees C (167F)  If we assume a linear rise from room temperature the protein test (113 to 133) is about 30 minutes, and the saccharificatrion rest is about one hour, and the average temperature is 150 degrees.  This is a pretty standard mash for a light bodied beer.  As an alternative to converting this to a step mash, the same rate of 1.5 minutes per degree could be used to achieve a ramping mash.  The boil time is one hour which is very standard.  Citrus and coriander aroma and taste are mentioned.

Measurements
The ABV is stated as 4.9% which the OG can be calculated from if the FG is known.  Degassing the beer the FG can be measured. With the sample that I have it appears to be 1.014.  Knowing the FG and the ABV we can calculate the OG.

Alternatively, the gravity can also be calculated from the ABV and the number of calories.  From the OG and FG the attenuation of the yeast can be calculated.

The attenuation is lower than a typical ale yeast, however fairly typical for some hefewisen and other yeasts commonly used for wheat beers.  Using the Whitbread Ale yeast from White Labs or Wyeast matches the attenuation, but Belgian Wit Ale seems to be more popular for this style.

Color can be compared to a BJCP color card to get an idea of the SRM.  Or if you are really geeky you can measure it using an blue LED with 430nm wave length and matching photo detector, but we'll save that for another time.  Using the BJCP card Hoegaarden looks like a 3 or 4.

Experience
When tasting Hoegaarden the citrus flavor jumps right out.  There is also a fermented fruit flavor which makes me think they are using more than just the rind.  There may be some pulp in this beer.  The hop flavor is very subtle, but what is there has a distinct citrus flavor and very little bitterness.  There are likely no bittering hops, and only flavor or aroma additions.  My nose and taste buds say citrus, and the brewers website says Belgium.  Glacier matches this criteria so it should work well

The BJCP style guide
We're lucky because the first example listed in the BJCP style guide for category 16A is ... you guessed it, Hoegaarden Wit.  Even if the beer you are cloning isn't listed, using the ingredients for the appropriate style will still be of great value.  From this information we gather the the grain bill should be 50% base barley malt and 50% wheat malt.  The other additions that are mentioned are the same that we saw on the Hoegaarden web site, orange peel and coriander.  Looking at the other spices mentioned, and a second taste of the beer, there may be some cummin in the recipe as well.  Hoegaarden doesn't exactly fit into the styles "vital statistics" with the FG at 1.014 where the style guide shows the high end of 1.012. The IBU's for the style are 10-20.  My taste buds tell me that it is at the lower end of this range.

Sites that rate beer
The two big ones, Beer Advocate, and Rate Beer, provide access to hundreds of different peoples tasting notes on this produce.  Perusing them confirms the ingredients that have been selected thus far.  It's also worth noting that the beer is described as sweet by many people.  With the low mash temperature the beer would typically be dry, not sweet.  Therefore there is likely some dextrin or other sugars remaining unfermented.  This could be from a malt high in dextrin such as crystal malt, or from Carapils which is also high in long chain sugars.  The color of Hoegarrden is very light so Carapils is more likely. Another way to increase residual sweetness is to select a yeast that does not attenuate well, and to ferment at colder temperatures.

Forums and other online recipes
Between Homebrewtalk, Beer Smith, and a plethora of blogs and other sites the available information is overwhelming.  Choosing three to five recipes to compare will provide adequate information.  The next post will contain the clone recipe, and how it was derived. As a spoiler, I'll tell you I found an interview with the brewer!
Posted by Unknown at 11:30 AM