When has my beer finished fermenting? 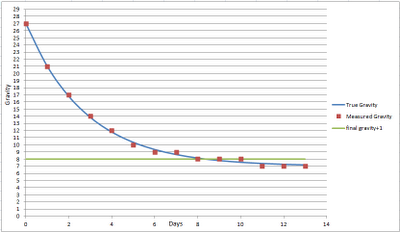 The common wisdom is that your beer has finished fermenting when two gravity readings are the same two or three days apart.  While this is true for most beers it is not quite be accurate for high gravity long fermenting lagers.  Also light high hoped ales you might want to get into bottles sooner rather than later to preserve the hop flavor.  Contrary to the common mantra, longer fermentation time is not always better.  If the fermentation temperature is bellow 60 degrees the beer may benefit from being warmed to about 70 degrees after the initial fermentation is complete.  This is called a diacetyl rest.

So where does the "two consecutive readings" rule come from?

A typical hydrometer can be read repeatably to one gravity point.  Also, one gravity point of sugar will add about 1 volume of CO2 to the beer.  So two consecutive readings will indicate that you are within one point of final gravity.  If you carbonate your beer to 2 volumes of CO2, the worst case would be a product carbonated to 3 volumes of CO2 which is still a reasonable amount of
carbonation.  This is a very reasonable rule to follow, but the time between the readings is a variable that can be addressed to better indicate when the beer is done.

Then ... how many days should be used between readings?

There are two main variables at work here.  The beer's original gravity, and the fermentation rate.  The original gravity is easy to determine, but there are a plethora of conditions that effect fermentation rate.  The goal is to determine when the beer is within one point of final gravity.  The fermentation rate itself is an unknown, but we do know that it will roughly follow a logarithmic rate.  Another way to think about this is that each day a percentage of the remaining sugar will be converted to alcohol.  Each day there is less sugar, so
the rate decreases with time.

In this plot of gravity vs time notice that the gravity continues to fall indefinitely even after one point of stability is reached at day eight.  Also note that in this case the gravity would have been incorrectly read as stable if measurements on days 6 and 7 were used.  For this case readings two days apart would be adequate.

Crunching the numbers you can come to this same conclusion, but the following table shows how many days apart readings should be taken based on the initial gravity and number of days from the start of fermentation.

Gravity = OG * exp(-tou * t)
Where
Gravity is the number of gravity units above final gravity
OG is the original gravity (corrected for final gravity)
tou is the fermentation rate in percent per day
t is the time in days.