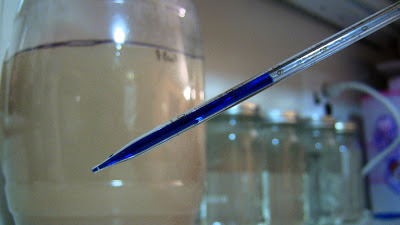 There are a number of factors that can reduce the viability of a yeast cake that you may have heard.  These include, high gravity, highly hoped, and dark color, but one I have not heard of is the effect of fruit on viability.  In the past few months I have made several fruit beers, and three of them I collected viability data on the yeast slurries taken from these brews.

I have been surprised to find that yeast slurries from beer made with fruit have a drastically lower viability!

On one of these fruit beers I took a cell sample during fermentation just before adding the fruit and the viability was in the high nineties as you would probably expect during active fermentation.  When the beer was bottled it was down to 1% viability.

The viability of the yeast that was taken from beers that did not have fruit has always been substantial higher. It looks like from this point forward, in order to save the yeast, I will be racking off of the yeast cake before adding fruit.

Although this evidence seems fairly conclusive, I am hesitant to say this is always the case.  But independent of what the causes is, there are significantly less viable yeast cells per liter of slurry.  If a microscope was not used to asses viability before pitching, and a standard cell density was assumed, the wort would end up drastically under pitched, even if using a starter.

The fruit in these beers has pasteurized and has the cellulose removed with a strainer before being adding to the secondary fermentor.  You can see exactly how it was done in the blog post called "Fruit The Easy Way." In the juice that is transferred to the fermentor there are likely still a plethora of fruit cells.  It is possible that this large cellular mass is being counted as dead yeast cells and thus the viability show as being low.

Perhaps there is some merit to a secondary fermentation vessel.