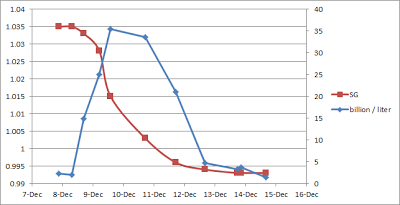 Recently I plotted the viable suspended cell density and specific gravity of a normal fermentation.  It was one gallon 1.036 wort pitched with 7 billion cells per liter.  The wort was 1 gallon composed of all sucrose except for 1/2 tsp of yeast nutrient.  The yeast pitched was 25 billion cells of EC-1118 Champagne Yeast.


Yeast Growth as a function of available sugar.

Note the hyper attenuation that resulted from this combination.  Not only is champagne yeast known for it's ability to fully ferment a wort, but when provided with yeast nutrients and a wort of simple sugars, it has no problem converting all of the sugar to alcohol.  Because alcohol is lighter than water the resulting solution is lower than 1.000 specific gravity.

Notice that the highest rate of cell production directly correlates to highest concentration of sugar .  This is seen as the second through fifth data point. As the available sugar decreases the cells fall out of suspension faster than they are being produced.  (data points 6 though 8) When fermentation is nearly complete the cells maintain a concentration of about 3 billion cells per liter.

The peak cell density suspended in the wort was 35 billion cells per liter, or about five time the initial cell count.

The yeast that was pitched was approximately 5% viable, as can be observed on the fist point of the viability graph.  After approximately half a day the yeast began dividing as can be seen by the increase in both viability and viable cell density.

The number of non-viable cells in suspension tracks that of the viable population.  I suspect that this is caused by simple mechanical stimulation.  As the living yeast cells produce CO2 a small bubble forms on the cell causing it to float.  On it's way to the surface it bumps into dead yeast cells and carries them upward.

The peak viability is reached at the same time the food source has been consumed.  As the fermentation completes the viability percent also increases but the cell count in suspension is about a tenth of the peak value.  So although the non-viable cells do flocculate faster after fermentation has completed there are very few viable cells on top of the layer of dead cells.