How Many Cells Are Produced By A Starter? 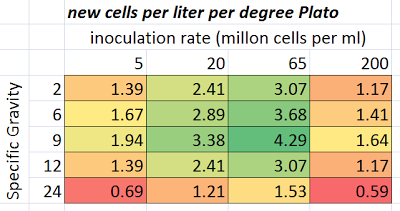 The above table is a summary what is expected.  It is not derived from the results of this experiment.

There are a few calculators that you can use to figure this out fairly simply base on the number of cells that you are starting with, and the volume of wort that is fermenting.

But how accurate are these calculators?

Tell me you are interested by commenting on this post, or send me an email : WoodlandBrew@gmail.com
When I added a microscope to my brewing equipment I was surprised to learn how far off these type of estimates can be.

There are some factors that remain the same from one setup to the other, and some that change.  Most people propagate cells at ambient air conditions, so in these experiments temperature will not be used as a variable.  Also, not everyone has access to a stir plate, so no stir plate will be used in these experiments.

One of the things that people often seem to change without thinking about the consequences is the specific gravity of the wort.  Because most starter calculators seem to be based on data collected with a 1.036 specific gravity wort, a range around this gravity will be used.

The next factor is the ratio of cells pitched to wort volume, also known as the inoculation rate.  The yeast, being very small, have no idea how big the starter is.  It could be 10ml or 5 gallons, and they would function the same.  What will effect them is how crowded the vessel is.  This is essentially the inoculation rate.  If there are 1 billion cells in a 10 ml wort, or 10 billion cells in 100 ml of wort the growth will be the same.  In both cases the the cell population grows by about 50%.

Another factor that is not considered by the calculators is the strain of yeast.  I'll be testing some common strains and some not so common ones so that you can have a better idea of how your yeast may preform.
A total of 50 tests will be run.

The same inoculation rates and the 1.036 gravity will be used with five additional yeast for the remaining 25 tests.  The yeast will be WLP004 Irish Ale, WLP862 Cry Havoc, WLP566 Belgian Saison, EC-1118, and for variety, Fleischmann's Bread Yeast.

I would be happy to add your yeast to the list.  Just send me a message and we can work out the details.