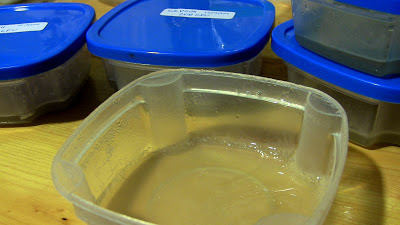 Plating is a wonderfully easy way to separate the good from the bad.   After only two days you should be able to see distinct round colonies of yeast.  These are what you will want to remove with a pipette to start a larger culture.

One of my recent batches of beer was used to propagate the S-04 strain. When it came time to harvest the slurry I grabbed what I thought was the sterilized jar I had prepared, but at the end of the day I realized I had grabbed jar I intended.  The jar I had picked up from the counter was in line for the dish washer and had only been rinsed out after being used as a jam jar.  I saved the slurry for a week, just in case things might work out for me, but when I did the cell count I found that the viability was very low, and there were significant signs of cocci bacteria.  Later, over the course of about a week I drank some of the beers and save the dredges in a container in the fridge.  Unfortunately, dredges, without the protection of the beer, spoil quickly.  When I looked at the dredges under a microscope half of the cells were the characteristic finger shaped mold cells.  This was not going to work for bottle conditioning directly.  You would think at this point I would give up.  S-04 is only about $4 at my local home brew store, but I didn't.  In the spirit of experimentation and experience I pressed on.  I diluted and plated the yeast so that I can separate good yeast colonies from the mold colonies.  So here is how I did it:

Isolating a single yeast cell isn't as hard as it might sound, and is very possible even without a microscope.  Your first job will be to make gelatin plates.  You will only need one for each strain.

Combine all ingredients in a shallow dish with a top and microwave on high for 30 seconds with the top slightly ajar.  Slosh or shake the container until everything is dissolved.  Microwave on high for another 30 seconds.  This should bring the contents to a boil.  I gave a plate an extra 30 seconds recently, "just to be safe" and it boiled over.   Close the lid and place it in the refrigerator.  If the lid is air tight you may need to let it breath a few times as the liquid cools.  In a few hours your plate will have jelled and you will be ready to move on.  Plate will keep in the refrigerator for quite a while, but the sooner you use the plate, the lower the risk of contamination.  It's easy enough to make the plate a day ahead.

The first time I tried plating I thought the best way to do it would be to dilute the cells so that I would have individual colonies across the entire plate.  Dilution, however, is over kill for this application.  If you were trying to assess the types and amounts of bacteria in solution then dilution would be useful.

The easiest way to isolate single yeast strains is by streaking.  The idea is that you start with a concentrated amount and as you streak it across the plate the cell concentration will diminish.  The longer the streak the further the cells will be apart.  It's best to avoid digging into the media on the plate.  This will bury the colonies beneath the surface.  A glass stir rod, or a pipette might be easier to use than a culture loop for the streaking processes.

1) Pipette one drop of your slurry or bottle dregs onto the upper right corner of the plate.  (One drop is all you will need to cover the plate.  The water will not be absorbed by the media so the less you have the better)

2) Use a sterile dry pipette (or stir rod) to draw a "C" shaped line across the top of the plate and down the left hand side and across the bottom.  It is important that the tool is dry.  If it is wet you will end up with pools of mixed cells instead of distinct cultures.  See the image at the bottom of this post.
4) Starting from the bottom working your way up draw lines from the left hand line across to the right working your way up the plate. These should be about a centimeter or half inch apart.

Cover the plate and put it out of the way somewhere, preferably slightly warm such as on top of the refrigerator.  Try not to be curious at this point.  It is very important that the plate is not moved for 48 hours.  The yeast cells need to implant on the media.  If they are disturbed they will continue to float around in the shallow puddle and not form individual colonies.

In 4 to 10 days you should see distinct circular colonies that are yeast.  Suck these up with a pipette to grow the culture.  Look out for large fuzzy growths hazy cloud shapes.  These are mold and bacteria. 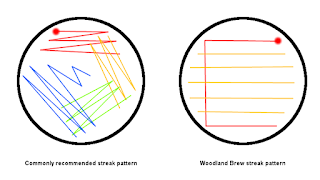