How Much Oxygen Does It Take To Make Healthy Yeast? 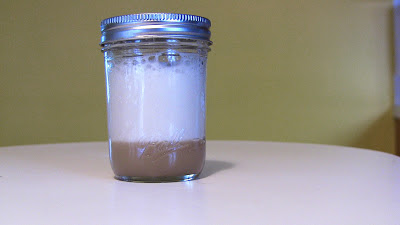 It seems like there are more opinions on this topic that there are brewers.  You have probably heard guidelines such as "it's impossible to over oxygenate" and others might say "shaking the carboy for 5 minutes provides adequate oxygen"  One of the more specific guidelines I have heard is "1ppm of Oxygen per degree Plato"  So for a 9 Plato (1.036 SG) wort 9ppm of oxygen would be required.  I like that last one, it's easy to remember and easy to use, but is it right?

When and why do yeast need oxygen?

The number one reason yeast need oxygen is for sterol production.   Production of these sterols occurs during the initial phase, and during the exponential cell growth phase.   This is typically the first two or three days after pitching the yeast.  This phase can be identified by observing the krausen.  Sterol production is occurring before the krausen is present and while it is growing in size.  Once the krausen has peaked less sterols are being produced and the yeast are mostly fermenting sugar into alcohol.

In addition to sterol production yeast use oxygen in other ways.  The oxygen considered here is for only sterol production.  Further research will need to be done to account for other uses of oxygen.

During actual fermentation, or EMP pathway, yeast function anaerobically and therefor don't need any dissolved oxygen in this phase.  (1) However in order to achieve proper yeast function during this phase it is important that there was adequate oxygen earlier during the yeast development.

Let's look at some of these guidelines from a microbiological standpoint to figure out how much oxygen is really needed.  Every yeast strain is a little different, but luckily for us the principles have  been widely documented, it only requires some application of these principles.

"Sterol biosynthesis requires 0.1 to 0.3 mg of dissolved oxygen per g (dry mass) of yeast" (2)
Knowing that we need 0.1-0.3 mg of oxygen per gram of yeast the next thing we need to know is how many cells are in one gram of yeast.   Cell counts I have done previously showed 11 gram packages had about 21 Billion cells per gram.  (This number includes the dead cells as well as the ones that hydrated properly)  Others sources indicate 15 billion cells per gram. (5)  For five gallon 1.028 wort 100 billion cells would be needed.   The final cell population will be about five times the initial at 500 billion cells.  500 billion cells is 24 grams and would require 2.4-7.1mg of oxygen.


This is much less oxygen than the 4-8ppm that can easily be supplied by agitating the wort.  However many brewers have seen that more oxygen is beneficial to fermentation.  Because dry yeast retains the sterols produced when packaged it does need to rebuild this reserve.  This might be why these numbers seem so low.

Another way to look at this stems from Fix, Principles of Brewing Science.(1)  At the height of fermentation sterols make up 1% of the yeasts chemical constitutes by weight.  All sterols stem from the conversion of Saqualene to Lanosterol.  This conversion requires 37.5mg of oxygen for every gram of Lanosterol produced.  Lanosterol can then be formed into Ergosterol and Zymosterol.  These two both have a lower molar mass than Saqualene, meaning that other chemical compounds are produced during the synthesis of these sterols.  (93% and 90% respectively)  To maximize the sterol mass the minimum oxygen would be that required to produce only Lanosterol.  500 billion cells is about 24 grams of yeast.  The 1% mass of the sterols is 240mg.  9mg of oxygen would be required.

There are other factors that must be explored to further understand yeast's requirement for oxygen.

As the sugar content of the wort increases the amount of oxygen that can be dissolved decreases.  To dissolve each molecule of a compound, several molecules of water are needed.  If some of these water molecules are tied up dissolving sugar they are not available to dissolve the oxygen.  (3) However, the saturation point of sugars has only begun to be approached when the gravity reaches above 1.200, (4) so sugar content will not effect the limit of dissolved oxygen much in even most high gravity beers.

When using a pure O2 system it may be best to saturate a portion of the wort with O2 and then add wort that has not been oxygenated to the saturate wort to create a wort with the desired level of O2.  When not using a dissolved oxygen meter this could provide accurate and repeatable results.

(1) Principles of Brewing Science: A Study of Serious Brewing Issues