This yeast is extremely flocculent.  Viability was counted with Methelyene blue, and a second test was done with a 5% acidic acid chelating solution.  The bacteria level may be a concern.  You might consider acid washing the yeast directly before pitching.  (See next page for more notes)

This report is an evaluation of the sample that was provided.  There are no guarantees.  The sample may perform differently than the slurry for a number of reasons that are beyond control.  Care is taken to provide accurate results, however measurement error due to equipment tolerances, process, and calibration will create deviation in measurement from absolute values. This is not an evaluation of health or safety risks. 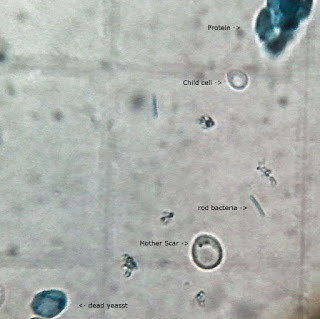 1000x magnification.  The image is about 100 micrometers across. 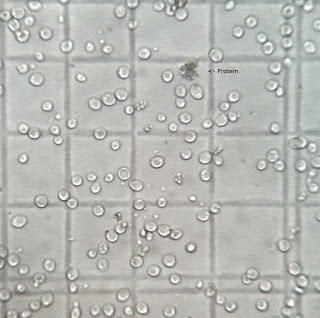 The un-flocculated cells above were used for the cell count.  The stained cells were used for viability.  The combination of the two of these results were used to produce the viable cell count.  Unfortunately acidic acid extracts the methylene blue from the cells so the two cannot be used coincidently.
Posted by Unknown at 12:33 PM