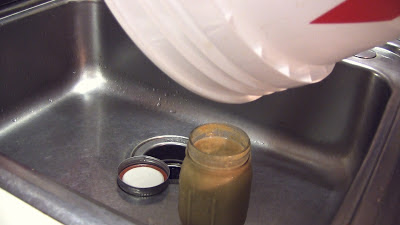 Maintaining yeast over long periods of time is often over thought resulting in more chances of contamination and loss of 95% of the viable yeast.  Water washing of yeast, often referred to as yeast washing or yeast rinsing, results in discarding all but a 1/20th of the viable yeast and, in my opinion,  should not be done to prepare the yeast for storage.

1) After racking the beer off of the cake, slosh the vessels to homogenize the slurry.
2) Pour the slurry into three or four quart size mason jars.
3) Store the Jars in the refrigerator.

During the first few days of storage CO2 will be released from solution.  It is important that this gas can escape.  The easiest way to accomplish this is to not tighten the lid all the way.  Leaving it just a little tight for the first few days will allow the CO2 to escape slowly and because there will be a positive pressure in the container contaminates will not get in.  If you are concerned about contaminates then another option is to vent the containers a couple of times a day until all of the pressure has been released.

Yeast, when properly stored, will last for six months according to "The Practical Brewer"(3)

Each jar will typically contain 300 billion to 2 trillion cells.  If you don't have a microscope 1 trillion cells is a good estimate.  If the ABV of the beer that it was taken from was less than 6%, and there was no fruit added before the slurry was collected then it is fairly safe to assume the viability is 90%.  Viability does not drop much over time, so don't use any date based calculations for viability.  The type of beer that the slurry was take from have a much larger effect on viability.