How To Harvest Yeast From A Bottle. 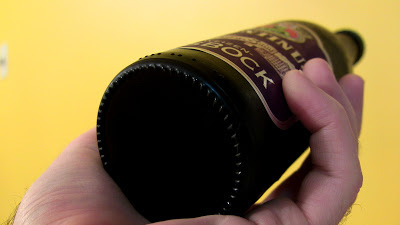 There are numerous strains available to the home brewer that cover just about the whole gamete of beers you might be brewing.  But that doesn't mean that you might want to add bottle harvesting to your bag of tricks. You might consider it to obtain yeast strains that cannot be purchased, such as from a bottle conditioned Belgium beer, or you might want to harvest from a fellow home brewers beer that was made with a "Platinum Series" or otherwise exclusive yeast.  Perhaps you just want to save a few bucks, or maybe you just relish the challenge.

In order to successfully harvest yeast from a bottle conditioned beer, the yeast must be viable, and the yeast must not be contaminated.  That seems like a no brainier, but it is important to consider.  If you have a microscope I would check before spending much time with the yeast. If you don't have a microscope I highly recommend that you start by plating the dregs.  All of the dregs that I have looked at contained at least some bacteria or mold, and in many cases there have been enough to dominate the culture.

One good thing about yeast is that it just does it's own thing. If you want you can check it periodically, but if you forget about it for a few days it will just keep going on it's own. The only real cost is a little time and some dry malt extract.  Using this method will take five short interactions over a couple of weeks, and 200 grams of DME.

To keep the numbers round lets just use 1 billion total cells.  The viability will likely not be great, so lets assume 50%.  That's 500 million cells.  The set of experiments done at White Labs that were used to develop the Mr. Malty calculator.  (And the same data that was taken to produce Yeast Calc) Indicate that the most new cells per volume can be produced with an inoculation rate of 65 million cells per ml.

Of course you will want to keep things as sterile as possible during this processes.  A foil cap on the bottle is probably a good idea.  Also, once the bottle has been opened it is ripe for infection so you want to start this processes the same day if possible.

If you wanted to have the yeast ready as soon as possible the minimum time line is just over a week, but if you are a busy person, you could stretch the time line out to a month without any real consequence.

Here's how to do it: