How to measure thermometer drift to compensate for calibration 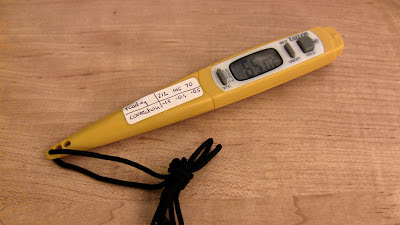 Every measurement device has some inherent error.

An oven thermometer that I purchased recently was off by five degrees!  This doesn't mean that it is "broken" or "bad" simply that it is not accurate.  Of course the closer the display is to actual temperature will not only make use of the thermometer easier, but it will give you confidence that it is accurate at temperatures that are harder to measure for certain.

To measure the error, bring water to a rolling boil and measure the temperature.  The thermometer I purchased recently measured 210.0°F, or two degrees low.   At sea level, liquid water can only get to 212°F before it vaporizes, making it  impossible to heat the water too much.  If you are located significantly higher than sea level, then you will need to compensate the boiling temperature with altitude.  For every 500 feet above sea level the boiling point of water drops 1 degree Fahrenheit.

Solid ice can be colder than freezing, or 32°F. If the thermometer were placed in a freezer in a glass of water the temperature measure could be bellow 32°F.  Instead, the thermometer can be placed in a glass of ice water.  Crushed ice will ensure that more of the water is in contact with ice making the temperature closer to freezing.  Putting the glass in the freezer will also get the water closer to freezing, but you'll want to take the measurement before the water freezes.

A third temperature can be recorded that is between these two.  It's not necessary, but give you a little more data to work with and will give you an idea of the accuracy of the interpolated temperatures between.  If you don't have a fever, then your body temperature, under the tongue,  should be 98.2+/-0.7°F mid morning. (1)

But if you are like me and want to really geek this out, keep reading, and don't worry, you only have to do this once. The recorded deviation at boiling and at freezing can be combined to create a reasonable guess of the deviation of temperatures measured in between.  For this we need to derive a best line fit for the boiling and freezing points, and then we can use this to check the third temperature point that was measured to get a sense of accuracy.

We know two situations and have two unknowns, so this is solvable.   I'll spare you the bore of watching me lash out the algebra, and skip to the equations:

For example, my thermometer measured 210°F at boiling, and 33°F degrees at freezing.  My body temperature measured 98.5°F.

We can then use this to find the correction factor at 98.5°F

So that I don't have to do this math every time I use my thermometer I just made an abbreviated table with correction factors for common temperatures that I measure.

(1) http://en.wikipedia.org/wiki/Human_body_temperature
Posted by Unknown at 11:30 AM