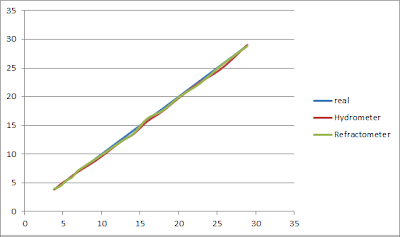 Hydrometers work by measuring the relative density of a liquid.  Brewers use this density assuming that it a solution of sucrose and water to determine the sugar content.  Refractometers measure the refraction index, and like with a hydrometer, the assumption is made that the solution is water and sucrose.  Because sucrose has a very similar density, and refraction index when compared  to other sugars this is a reasonable assumption.

*Value of a theoretical 100% solution by volume used for calculating the Brix value.

There are some common sources of error between the two devices.  The sample must be well homogenized before a sample is taken.  Stratification is especially common when working with liquid malt extracts.

There are some sources of error unique to the refractometer.  Because a very small sample of wort is used any contaminate left on the prism will add error to the measurement.  Cleaning the prism after use is important so that sugar residue does not skew then subsequent readings.

Some of the tools to preform this test can be found at the bottom of this page.  The graphs below were produced using serial dilutions.  The starting volume was 100ml of a 23 Plato wort.  Each dilution was achieved by removing 10ml of wort and replacing it with 10ml of water. 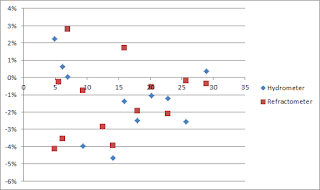 Vertical Axis is the Percent Error
Horizontal Axis is °P 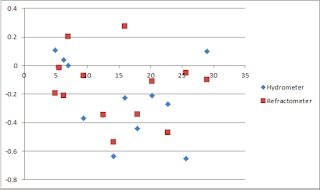 The graph below was created with ten discreet dilutions of the same 23° Plato wort.  Because of the smaller sample size that was prepared only the refractometer was used for measurements. 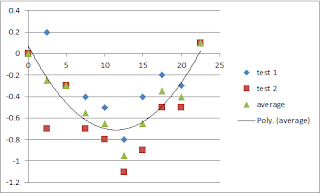