Side by Side Starters 2 of 4 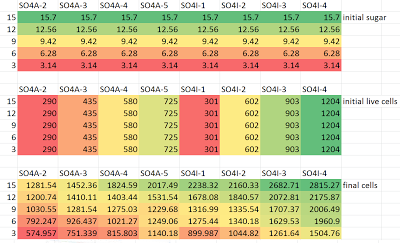 To achieve the cell counts each slurry was counted and then varying volumes were added to the culture tubes.  For the active yeast cells these ranged from 2 to 5 ml, and for the inactive culture they ranged from 1 to 4ml.  Adjustments to gravity measurements would be needed because there is inherently residual sugar and alcohol in the slurry.

The array of gravities were achieved by diluting a 31.4°P wort and adding 1 to 5 ml. The remaining volume was filled with water to ensure each tube had 10ml of total volume.

The tubes were allowed to ferment for two weeks and then refrigerated and allowed to settle for several days.  The height of the yeast cake in each tube was measured.  Six cell counts were done and these were correlated to the heights of the remainder of the tubes to produce the final cell counts.  A linear fit based on the number of ml of slurry was used to equate milliliters of slurry to number of cells.  For this fit, the r2 value for the active culture was 0.9936 and the r2 value for the inactive culture was 0.9850