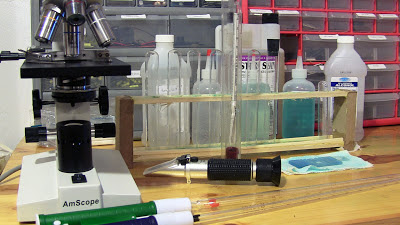 Since I've been working in my brew lab I've learned a few things the hard way.  My hope is to share some of the things that I have learned here with those just getting started with running experiments for brewing.

The Internet has a wealth of information on procedures and techniques for a variety of measurements, but keep in mind that not all of these are correct, or even safe!  Read more, experiment less.  Use common sense.  Talk to people who know what they are doing.  Much of what is available on the Internet comes in small scraps of information leaving a majority of the procedure left to assumptions.  This can be a disaster waiting to happen.  Proceed with extreme caution.

Running every experiment three times, or in triplicate, is a good idea.  This is especially true if the experiment will take a long time.   Running the experiment just once can lead to false conclusions because there will be no way of knowing if something went wrong.  If you run experiments in duplicate the difference between the two will indicate the amount of error that your results may have.  When running experiments in triplicate, if all three results are near each other you have and even better idea of accuracy.  If there is one out layer, you'll probably want to find the source of the error and discard the data if appropriate.

You probably know that pipettes are calibrated to dispense an accurate volume when the bottom of the meniscus of the sample lines up with the graduated line.   But, did you know that about 5% of the volume of the sample remains in the pipette clinging to the glass after the sample is dispensed?  The dispensed volume will be accurate because they are graduated with this in mind.  However if you are not careful this can be a problem.  If you wash your pipette in alcohol, and then rinse it in sterile water you can be confident that the chances of contaminating your sample are very low, but the walls of the pipette are wet.  If you simply draw the sample into the pipette your sample will be diluted by 5%.  Instead of just drawing into the pipette once, draw and expel the sample twice.  The error will be much less at about one quarter of one percent.

To clean test tubes I typically rinse them three times with water, and then fill them half way with alcohol and give them a shake.  I then pour the alcohol into a bottle used only for washing.  The test tubes are then inverted and allowed to air dry.  This works very well, as long as the tubes are allowed to dry completely.  If there is a even a thin coating of alcohol in a test tube, and a yeast sample is added, the yeast will be killed quickly.  It is especially important to be mindful of this when working with samples one milliliter or less as typically used for cell counts.

There is more to focus than just the focus knob.   First, at the lowest magnification, adjust the direction of the light.  This can be accomplished by closing the diaphragm all the way and then moving the lens assembly directly below the stage.  Focus the slide at this point.  Next adjust the focus of the light.  This is done by rotating the lens assembly directly below the stage.  Turn until you see what looks like fine film grain in the center of the slide.  Now you'll want to get your sample in focus.  Step up the magnification adjusting the focus at the intermediate steps.  Once the yeast is focused with the diaphragm all the way closed you'll notice that the edge of the cell has a hallow.  Open the diaphragm and adjust the focus until this disappears.  This is much easier to explain visually.  If you are interested, let me know in a comment and I'll put a little video together.