Side by Side Starters 3 of 4 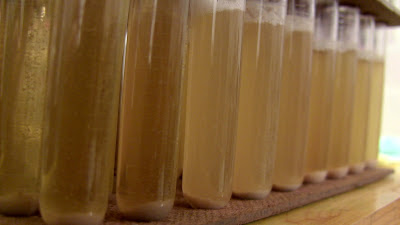 Observations of the daily collected data.

When looking at the daily collected data, the first thing that really jumped out was the correlation between sugar consumed and cell count.  Sugar is known to be a limiting factor in cell propagation, but seeing how well the two correlated was surprising.  This opens up a new way to look at yeast growth.  Trying to determine cell growth solely from the input conditions is not using all of the data available.  If in addition the final sugar by weight is used a much better approximation of cell count can be achieved.

Both of the test vials followed very close to producing 12 billion cells for every gram of extract consumed.  Another way to look at that number is relative to volume.  For each degree Plato the cell density increases by 12 million per ml.

Both the refrigerated cells and the new cells started consuming sugar almost immediately.  Both had reduced the sugar in the wort by half in the first day.

The daily data shows that the refrigerated slurry out preformed the cells removed from a starter.  This was a second big surprise.  Common brewing knowledge would indicate that cells that have been in the refrigerator for a month will be starved, and will not preform well, however quite the contrary was the case here.

It seems that it is better to allow a starter to run to completion than to use the cells at high krausen.