Cell growth as a function of sugar 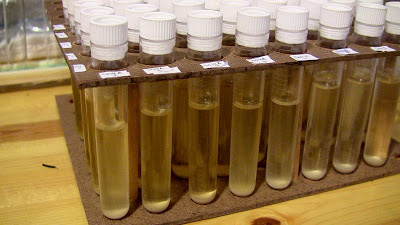 In the early 1800s, Karl Balling made an observation about fermentation.  What he saw then was just as true then as it is now.  It's an equation that is often quoted by brewing chemists, and can be used to give you a better cell count estimate than any online calculator I have seen.

Hearing that there is a better way to estimate cells than the online calculators is likely not a surprise if you have ever counted cells produced by a starter.  I've done a number of tests on starters, and most of them have concluded that the cell growth in my starters don't match that on the calculators.  From other people that I have talked to that count the cells produced by their starters they see this as well.

Most online calculators use the initial cell count and the volume of wort to estimate the final cell count.   What I have found is that cell growth is rarely a function of volume or initial cell population, but a function of consumed sugar.  My observations roughly follows the old brewers rule of 10 billion cells produced per liter per °P.  I've struggled to fine where this rule comes from.  Today I read a post by a well respected brewing chemist who quoted Balling observation of normal fermentation:

But instead of "other constitutes" he said "yeast."  Of course this makes sense!  The sucrose is used to store energy as ATP and NAHD in the yeast, create sterols in the yeast, build cell walls... all in the yeast!

Converting the equation for 1 litter of 1°P wort we have:

Or put another way, for every gram of sugar consumed we get 1 billion cells.

It really is this easy:

For your starter you'll want to add about 20-30% extra malt to compensate for the sugars that cannot be fermented.  A refractometer is a wonderful tool for measuring the composition of small worts such as starters.  Using an initial gravity and final gravity reading you will be able to estimate the number of cells grown in the wort at any given time.  When measuring with a refractometer the sugar content needs to be compensated for alcohol.  (1)(2) This can be worked into the equation:

If you want, use the popular online calculators to get your starter setup, and then take gravity reading to get a much better idea of how many cells you actually have.  Crash it in the refrigerator when you get to the number you need for your beer.  As an alternative, let it ferment to completion and estimate the cell count based on change in gravity.  Then pitch just what you need of the slurry.

Try it and let me know. I bet you will be within 15% of your anticipated cell count given normal fermentation conditions.  There are other factors.  This is in terms of sugar consumed.  Un-metabolised sugar will not be converted to yeast.  Oxygen can be a limiting factor, but if your pitch rate is under about 100 million cells per ml and give the container a good shake when pitching things should work.  Alcohol generated can kill yeast so you'll want to keep the gravity at or below 10°P (1.040) or about 100g per liter of water. (1/4c DME in 1 quart)